I’ll be your host today. Welcome.

The show is produced by Derek Stone, the hardest working man in radio.
He’s also the host of Stone Cold Sports, Sundays at noon thirty, right after my friend Sean Todd, the Rockin’ Rev on The Intersection at noon.

Joining me today in the studio at WAAM Radio is Pastor Rick Deitering of Moment of Clarity.

Let’s open in prayer.
Father, please lead us and guide us in our discussion today,
And please do the same in our lives as we live them.
Please give us the wisdom we need as we fight the destruction of our country by the people who are supposed to be defending it. Please move mightily and either bring them to a place of repentance or remove them from power.
Please draw people into Your Kingdom, because ultimately, it is Your Kingdom that will survive and dominate.

This is free fall radio. Working without a net. We are live and current.
I’d like to announce that Pastor Artur will not be joining us today as planned, nor will he be speaking at Ignite Church this Wednesday. There were some serious lapses in communication with the organization that is handling his schedule and Pastor Sean Todd and I decided to postpone so that we could be better organized on a future date.
We will keep you informed. I announced this on Facebook.

It’s Day 206 of the coup. Our government has been taken and is being used against us.
You and I are under attack by our own government. Prove me wrong.
Our job is to resist. To support each other and to push back their agenda.
To encourage each other. That is one of the purposes of this show. To encourage and strengthen and provide a platform for those who would help us reclaim our nation.

In the news: We have abandoned Afghanistan. The Taliban pledged to break with Al- Qaeda under the Trump peace talks but never did. Al- Qaeda with Osama bin Laden attacked America 20 years ago on September 11th, 2001.
The anniversary is a month from now. Al- Qaeda won. The Taliban won. Helicopters off the roofs of Saigon.

The fascist demonic left wants to demand that everyone gets the supposed vaccine.

Some are offering alternatives like wearing a stupid mask that does nothing and getting regular invasive testing that the inventor of the test says is inconclusive.
Business owners, particularly restaurant owners don’t know how to plan.
How much or what food to order.
Especially with rising prices due the inflation intentionally brought on by the rulers of this country.

Once again, a vicious international organization has gained control and has sold America short to their financial enrichment. And we are all paying the price and no one understands the finances of what they did.
They took loans and bought stuff with borrowed American dollars, like gold and precious metals.
Then they drove the value of the dollar down by printing more money to cover these outrageous “infrastructure” bills to the tune of trillions. Then, when you and I are paying more for groceries, rent, gas, electricity they are selling some of what they bought to pay back in full what they borrowed in dollars that are worth less than when they borrowed them.

They did this with the ChiVi attack. Was the Chinese Virus an intentional attack and planned release or did it accidentally get loose before they had perfected it to do even more damage.
Because if it wasn’t for the fear mongering, the marketing, the lies, this would not have been the tragedy it has become.
Now “The science is settled.” Shut up. Get your shot, the one that is designed to change your genetics.
Put a diaper on your face. Let us shove a bristle brush up your nose and pretend it will detect the virus and nothing else.
You get a jab or lose your job or get locked in your house.

The school season is coming up and many want to have your, our, kids and grandkids, get that flawed inoculation or wear a mask against a virus that is NO THREAT to them.

There is a threat to these kids and our country (as they are it’s future) that is so terrible and destructive, that it will take more than a mask or a shot to avoid.

They must be made to wear earplugs. And blindfolds.

There are people who are warriors, supporters of warriors and resistors to tyranny.

When you stand up to tyranny, you are a warrior. Everyday warriors.
Here’s one:

That was one. Here’s another. My Guest today is Ilona Rugg: 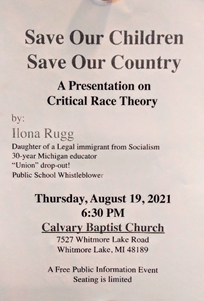