I am watching the popular The Man in the High Castle series on Amazon Prime.

In it, these scenes in the video below demonstrate the political orientation of people who rewrite history and tear down statues.

I was utterly shocked to see these scenes on Amazon Prime, let alone my "television"!

If you don't know, The Man in the High Castle is a highly popular series in it's third season.
It is based on a book I read back in the 70's: 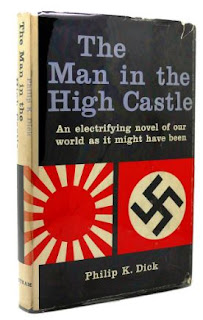 It envisions that the Nazis and the Japanese won WW2 and split up North America.
The American Reich has control of the East Coast and most of the Midwest.
These scenes from the third season (that has just come out) show how the Nazi's intend to cement their grip on the American populace.
Jahr Null. Year Zero. Starting fresh.

I am, once again, amazed that the corollary between the Left and the Nazis is so clearly demonstrated.

I had originally posted these on YouTube and now they are blocked due to copyright concerns.

I recorded these off-air with subtitles for this post for the benefit of discussion.
All copyrights apply..