The Pursuit of Destruction

I was in the studio with my co-host Gary when he gave me a book to read,
America the Happy.   (The Drift Radio Show July 13, 2019)
After leaving the station Saturday, I went to my grandson Devon's high school graduation party at my son Caleb's house.
It was a nice yard party, and I wound up talking to a friend (and former employer) of Caleb's who had helped him with one of his businesses.
Bill started talking about how unhappy some people were to live here, and that they probably never would be happy.
I asked if he had read the book and he hadn't heard of it.

That night I went to a free concert that I had helped coordinate. It was in our church yard and it was a local big band. They played American music. We served free hot dogs, soda and ice cream to the attendees. It was a good time. We were happy.
Even after I broke my toe taking the equipment down.

A number of things have struck me since these experiences, particularly after the President's in-artful comments about the Squad leaving this country.

Remember the quote from the Batman movie, The Dark Night, where Albert tells Bruce Wayne that there are some men who just want to burn it all down? 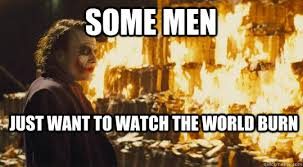 There are people who look around themselves and say, "I like America, I like living here. It needs a little fixing here and there. But I like it. I'm happy"

There are others who bitterly complain about everything and want to tear it down.
They don't see the good, only the bad.
They only look for the bad and see the world through bad-colored lenses.
They will never be satisfied. They won't be satisfied in the ashes either.
They are perpetually angry.
They want to burn it all down. 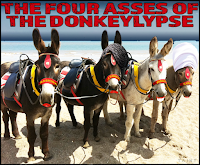 What do we do about it?

Posted by Ed Bonderenka at 6:55 AM