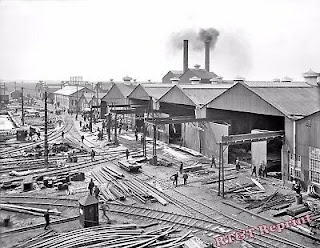 The yard, along with others and steel mills (Great Lakes, McClouth, etc.) was in River Rouge, Michigan and extended south into Ecorse along the Detroit River, just south of Detroit.
Other communities also stretched south creating the Downriver area.
My dad had a house in River Rouge and my grandparents had a house in Ecorse.
The major thoroughfare connecting these communities is Jefferson Avenue.
When I was a boy (and dinosaurs walked the earth) there were underground crossings along Jefferson so that no one had to stop for traffic while crossing.
Why?
Men walked to worked, in crowds, with their friends and co-workers, lunch bucket in hand, to get to work on time.
These underpasses have long been filled in and you might not suspect they were ever there.
These men worked at the mills and the yards and were dependent on them for their livelihood.

They owned their homes, or co-owned with the banks.
Coal ships delivered the energy to power these yards and mills and supply electricity to the communities. Coal was converted into coal gas to light furnaces and stoves/ovens in the homes.
Only in the 1970s were these coal gas plants replaced with natural gas piped in from the southwest.
That was a big deal.

So, to summarize, men worked very near (and were dependent on) their place of employment.
Few drove or owned cars and travel was by train.
If the plant closed, you got work at another.
If business slacked, you lived on savings and hopefully held onto your home, until it picked up again.
It was a feudal system in modern times.

The arrival of the personal automobile, and good roads, changed all that.
In the 70s, when I left the Air Force, I hired in at a local auto plant while I waited to re-start classes at the University. I bought a house minutes away.
I never left, the money was too good. I had entered Skilled Trades.
The plant closed eventually, and many guys were driving as far as Toledo to stay in the GM system.
There was no work for my trade at other plants, a bit of union politics.
So, over the years, I worked first at one place, and when it closed, I moved on to another.
I have driven an hour each way, at times, to stay employed, but I was not beholden to a feudal master.
If you've stayed this long, I'll get to the point.

The Democratic Left wants to reduce the carbon footprint to "save the planet".

What they really want is a return to the feudal system where tight pockets of workers are bound to the local employers who will be unionized and support the political leaders that empowered the system.

Talk about power-grabbing!
Remove the car, or limit it's recharging range to a battery, or remove it from the purchasing ability of the public and you've enslaved the workers.
How many entry level workers can afford a bright new shiny electric vehicle?
Or keep an older one running? People struggle to keep their older cars running as it is.
More people than you realize drive with no insurance (or registration) because they cannot afford it.
This is often due to legislation seemingly designed for that purpose.
Michigan has the highest auto insurance in the nation, particularly due to it's onerous "No Fault" legislation. as if their is never any fault in an accident.
If I drive and do not have full coverage, and you hit me? I'm out a car, because it wasn't your fault.

Back to the energy.

The leftist ideal is a Malthusian economy with fewer people, less consumption, and a low energy profile centered, as I said earlier, around urban centers (that are always leftist controlled) dependent on the feudal lords.
And their leftist masters.

Addendum:
The Drift Radio Show
100% All American content here.
No foreign components or assembly.
Some listening required.
Caution: May cause thinking, laughter, eye-rolling.
If these symptoms persist after an hour, consult your doctor.
There's something not right with you.

These are pictures of coal gas accumulators.
There was a giant dome that slid down into a moat to seal the gas as it emptied during demand periods and on off periods, they pumped it back up again.

And from Eaton Rapids Joe (in comments):