It is 2am Wednesday morning.
I cannot sleep.
My eyes are tired, but I have a burden.
I have to teach on Luke 16:1-13 tonight, and I've never been happy with any interpretation of it I have heard.
Until now.
I did a simple thing.
I asked God to explain it to me.

The Parable of the Unjust Steward  (NKJV)
1 He also said to His disciples: “There was a certain rich man who had a steward, and an accusation was brought to him that this man was wasting his goods.
2 So he called him and said to him, ‘What is this I hear about you? Give an account of your stewardship, for you can no longer be steward.’
3 “Then the steward said within himself, ‘What shall I do? For my master is taking the stewardship away from me. I cannot dig; I am ashamed to beg. 4 I have resolved what to do, that when I am put out of the stewardship, they may receive me into their houses.’
5 “So he called every one of his master’s debtors to him, and said to the first, ‘How much do you owe my master?’ 6 And he said, ‘A hundred measures of oil.’ So he said to him, ‘Take your bill, and sit down quickly and write fifty.’ 7 Then he said to another, ‘And how much do you owe?’ So he said, ‘A hundred measures of wheat.’ And he said to him, ‘Take your bill, and write eighty.’
8 So the master commended the unjust steward because he had dealt shrewdly. For the sons of this world are more shrewd in their generation than the sons of light.
9 “And I say to you, make friends for yourselves by unrighteous mammon, that when you fail, they may receive you into an everlasting home. 10 He who is faithful in what is least is faithful also in much; and he who is unjust in what is least is unjust also in much.
11 Therefore if you have not been faithful in the unrighteous mammon, who will commit to your trust the true riches?
12 And if you have not been faithful in what is another man’s, who will give you what is your own?
13 “No servant can serve two masters; for either he will hate the one and love the other, or else he will be loyal to the one and despise the other. You cannot serve God and mammon.”

If you are familiar with it, consider this. 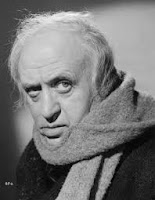 Ebeneezer Scrooge was a wealthy sinner.
He was found lacking by God.
It was Jacob Morley who informed Scrooge of this in an interesting way.
Jacob was just the messenger, but the message was "Repent!".
Who else ultimately calls us to repentance but God?

Spoiler alert! There are plot reveals ahead!

What has Scrooge been doing wrong?
He's been squandering the resources God gave him to do good with by consuming them himself, even if that is only by hoarding them.
He has not been living life large, and using God's resources entrusted to him to help others.

The Spirits of Christmas bring him to conviction and a fear for his life and eternal soul.

In repentance, he let's go of all the ill will he has been harboring, the hurts he has been cherishing and clinging to.
He forgives his nephew of not heeding his advice.
He rewards the Cratchit family financially. If you think of it, he had harbored ill will towards Bob for misusing him, stealing from him by not working the holiday (if not other claims on his loyalty). He now forgives him, and more.
He is generous to his charwoman, someone he imagines (in his dreams, only?) would steal from him.

So, what has he done after being called to account by his Master?

I tell you, the "Unjust Steward" is commended by his master for being shrewd. That is another word for "wise".
He used the resources of His master to resolve issues with his debtors, those who owed him.
It's true, he did it with his master's resources, but our Master fully intends for that!

The Master had "called him and said to him, ‘What is this I hear about you? Give an account of your stewardship, for you can no longer be steward.’"

How many master's give a shot across the bow like that when they suspect theft?

My Master does. He did. and He gave Scrooge that warning.

He gives all of us that warning.

Laying in bed, thinking about this, I realized that in the morning, I have some calls to make.
There are some debts I have not forgiven. And they are, and have been, chains around my neck.
I forged these chains. "I wear the chain I forged in life".

Email ThisBlogThis!Share to TwitterShare to FacebookShare to Pinterest
Labels: Men to be admired, Scripture References