Jess talks about listening to trains in the distance.

I was reminded of a night maybe 50 years ago.
We lived out in the sticks, but on what used to be a major highway (U.S. 24) whose traffic had been drawn away by I-75.

US 24 is also called Telegraph Road in our neck of the woods.
It had just gotten a new resurfacing of asphalt, and it was the middle of summer.
It was a hot, humid night and my room was on the second floor.
The windows were open and nothing was stirring.
It was about 3 a.m. when I heard it.
I find it hard to describe to you, but I knew it was a very faint echo of a humming sound.
I listened with curiosity as it slowly became louder and louder, the sound building in volume, but not clarity.
Then I got it.
After about 15 minutes, it drove by the front of our house.
An eighteen wheeler, alone in the night, the sole occupant of the highway driving at about 55 mph.

As I listened to it depart and it's sound decrease, just as it had increased as it arrived, I was struck by the conditions that had allowed this to happen.

The road was fresh asphalt, it was warm from the sun beating on it all day and the warm night had not allowed it to cool.
It was like one long violin or bass string set to vibrating by the one vehicle travelling it that night, that heavy laden semi.
Given his speed and the time I had started hearing him til he passed, I must have first heard him over ten miles away!
I was brother to the Indian scout with his ear to the rail on the plain listening for the approach of the white man's train.

That truck had actually made the road sing a song of lonely travel through the hot summer night.
I'll never hear that song again. 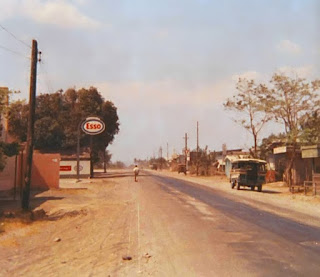 Posted by Ed Bonderenka at 7:41 PM

Email ThisBlogThis!Share to TwitterShare to FacebookShare to Pinterest
Labels: Fun Facts to Know and Tell