Science is Real!
(Except for the science that is fake.)

I walked past a few churches in downtown Ypsilanti, a liberal enclave, where among the lists of means of "inclusiveness" on their marquees (illegal immigrants welcome, LGBT welcome, see addendum) was :
"Science is Real!"
My first thought was "as opposed to what?".

On the same walk (to the Independence Day Parade, actually) I saw political literature that included the same motto.
I had not been exposed to it before.

It appeared to me to be a religious statement.
"We are not fooled by pie-in-the-sky doctrines"
which seems odd to be placed on a church marquee.

I read a web comic "Girl Genius" about mad scientists, for fun.
This is a panel: 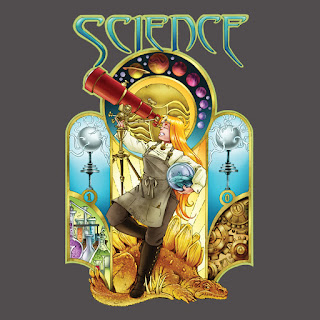 I was reminded of this when I read Rev Paul's post today about atheism being the law of the land in China. Atheism is a religion. a leap of faith. It often claims science to be it's underpinning.
Ya gotta believe something.

I don't find Faith and Science to be mutually exclusive and neither have some of our foremost scientists. But when Science becomes a religion to trump Faith, someone has the wrong estimation of what Science is.

"Faith is the substance (underpinning) of things hoped for, the evidence (conviction) of things not seen."  Hebrews 11:1

As for things that are seen? Observe, quantify, measure, test,... science.

Addendum:
Anyone is welcome in my church if they are not disruptive.
That is not to say that they will be approved of.

Posted by Ed Bonderenka at 3:58 PM