So What Are You Expected To Do?

Among other things, Gary and I played an audio clip of a woman threatened by a black man wearing a MAGA hat.
His hat inspired "fear" in her. It implied racism and hate towards her.

Well let me tell you how threatened I feel by your wearing a Che Guevera shirt, you little snowflake.
Che murdered people with impunity because of his socialist philosophy, like Lenin, Stalin, Castro, Pol Pot et al.
Scum that killed millions.
Would kill and enslave my family.

That woman, Nathan Phillips and the Black Israelites fear a MAGA hat?

Should no one fear an "indian" chanting and marching toward them while chanting some unintelligible nonsense?
Perhaps a War Chant?
Get's in your face? Stares at you while beating an animal skin with a club? 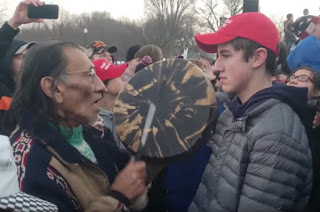 If I fear your intent, I will take you down.
Like a dog.
In the street.

You started it.
Lucky for you, you picked on a high school kid you bully.
But you knew he was unarmed in D.C.
You coward.