Progressive Abortion.
That's a term that can be interpreted many ways.
I was listening to the Abolitionist Round Table this morning, hosted by my friends Phil Stargell, Janice Daniels and Bruce Fleury (author of The Negro Project).
Bruce mentioned the progressive cause and their support of abortion.
This made me think of the progression of acceptability of, and the rationale for, abortion.

The rationale is that allowing that lump of tissue to grow into a child making demands on the mother (and society) would have adverse effects, making it an adverse event in itself.
Therefore it is fair to terminate it, in a twisted version of self-defense (yet they won't let us have guns for self-defense in their world).
As the baby progresses, there gains acceptance to kill it because the rationale hasn't changed.
It is still an adverse event.
Think Obama, not wanting to have his daughters punished by bearing an unwanted child.
The baby is a punishment to be averted.

As the life of the baby progresses, it's adverse effect on the mother and society (the punishment) does not wane, but becomes more visible. The baby isn't larger, the problem is.

This progresses until the baby is born. The problem hasn't gone away, the punishment is more apparent. The effect on the mother's pursuit of happiness is even more pronounced as it is on that of the society that chooses to support her.
The statistics show that fatherless children negatively impact society, so prevent them; in reality, kill them.

So the baby is born, the circumstances are unchanged and the path of least resistance is to kill the baby. Or let it die, which is the same thing.
Everything would be better if the baby just "went away", usually into a closet, then a dumpster.

I was on hold, while calling in to the show to present this train of thought, when Janice mentioned Malthus and population control (a favorite subject of Pascal Fervor).

Thomas Malthus felt that overpopulation would burden planetary resources, negatively impacting the welfare of the general population. It would be best if some people never existed.
Abortion filled the bill on that.

The most popular movie franchise on the planet, right now, is the Marvel Comics Universe, currently centered on the plot line of The Infinity Stones and the attempt by a character named Thanos (greek for Death) to acquire these stones. It was assumed that Thanos wanted this immense power to rule the universe.

It turns out that he has a more noble goal: Reduce the surplus population (H/T to Charles Dickens via Ebineezer Scrooge) to improve the lot of those who remain. 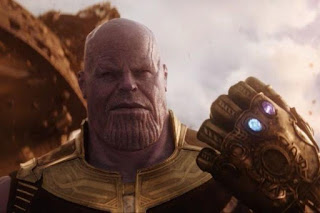 But Thanos doesn't intend to wait for attrition through abortion to accomplish his goal.

SPOILER ALERT
At the end of The Infinity Wars, Thanos gains his prize and eliminates half the population of the universe. Randomly, beloved characters turn to dust at the end of the movie and Thanos retires to his farm, mission accomplished.
END OF SPOILER

This extremely popular movie has demonstrated the explicit goals of the Malthusians, the Death Cult, the Sangers and Cecile Richards of this world.

It clearly demonstrates the logical outcome of the argument for abortion: make other peoples lives better by killing off the defenseless.
It also demonstrates the reaction of those who realize the loss they face, as friends turn to ash before their very eyes.

If properly used, this movie and the sequel EndGame (along with Unplanned) can begin to have as profound an effect on the appeal of abortion as did the early introduction of sonograms (The Silent Scream).