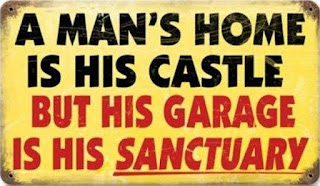 A Sanctuary is a place set apart.
Sanctuary cities were set up by God in Israel as a place someone could flee to til things cooled down and they could explain their side of the story.
The medieval church claimed that privilege for the church building Sanctuary.
The meaning of the word really was that the room was dedicated or "set apart" for God.
A Sanctuary can be a place to get a way to. 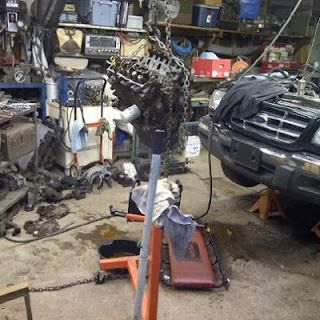 This is my garage.

I bought that Ranger pickup late in 2009 with 60k on the odometer.
I gave $6k for it.
A couple years ago, my radiator went bad and I overheated it.
After repairing the radiator, it never overheated again, got 20 mpg, had good acceleration, but had a miss at idle.
I did a compression test and found a cylinder had 50 psi instead of over 100.
I couldn't see how overheating the motor caused a burnt valve.
The valves let the fuel in, seal the combustion chamber (where the ignited gasoline goes boom) and let the exhaust out.

A valve might have it's edge where it seals develop a hot spot (from low octane gas causing "pinging" or some other reason) and burn a small hole which would prevent sealing all the "boom" in the cylinder.

Well I've been planning on removing the cylinder heads which hold the valves and having them re-conditioned.
For two years.
Lately the engine has been acting worse and worse.
It has 138,000 miles on it now. The body looks like it came off the showroom floor.
Last week the "planning stage" was over.
Last Sunday afternoon my brother and I pulled the heads off the truck. 2 1/2 hours.
We were confused. There were no burnt valves.
Monday we took them to the machine shop to have them re-conditioned.
Tuesday we were told they were junk.
They were so cracked from the overheating that they were unsalvageable.
There were many cracks in the valve seats.
This made us question the condition of the engine block.
New heads and gaskets, chain and water pump would come to around $600.
My brother's friend found us a used motor from a friend of his for $600 with 98k miles on it.
So Friday we went to the yard and got the motor.
Saturday I spent most of the day preparing to yank the motor out of my truck.
It's all ready to be pulled today when I get home from church and the the church Thanksgiving dinner. The turkey for which, Scherie stayed up until 2 am preparing. And I stayed up with her.
I'm about to leave for church.
I'll have a choice when I get home.
Pull motor or nap.
We'll see.

By the way, there's a communist in the White House.
Actually, quite a few.