My dad grew up in the previous Depression.

He mined coal in Pennsylvania.

My dad landed at Normandy, and was at Bastogne during the Bulge.

He married mom and became a dad.

He provided a home and an education for me and my brothers.

He led at Boy Scouts. Took us camping and on long vacations.

He taught me right from wrong and to stand up for myself and others.

And how to work on cars. 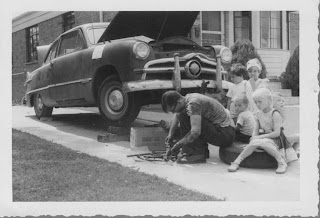 There are people who have looked at this picture and asked when I owned an old car like that since when I was younger I looked just like my dad in that picture.


A number of years ago, my dad came down with congestive heart disease and was told he only had about 6 months to live.
At the urging of his wife and Scherie, I started taking him out to breakfast on Saturday mornings.
We prayed for God to heal him and extend his life.
We did the Saturday morning (and afternoon) thing for six years.
I would occasionally attempt to get him to accept God's offer of salvation and was rebuffed.
A short while before he died, he was out in his shop getting a tool and his wife asked me if I was okay with the thought of my dad passing.
I told her that my only concern was for his soul.
She told me to ask him about that again, and I told her I didn't want to upset him.
He came in the house and she told him that I had a concern about his approaching departure (geez, the guy was still walking and talking and working in his shop) so he asked me and I told him.
That's when he told me that he had asked Jesus to forgive him of his sins and accept him into heaven, did I have any more questions?
I pressed a bit to assure myself I understood him right and then the three of us prayed.

A couple months later, he went to the hospital and they brought him home to die.
My brother and I held him (attempting to sit him up in his favorite chair) as he passed, quietly, peacefully surrounded by family that had assembled.

I miss him.
But I see him in his grandson.