Yesterday, I talked with author/Historian William J. Federer about his new bookMIRACULOUS MILESTONES in Science, Medicine & Innovation - And the Faith of Those Who Achieved Themand so much more!

Now available! Listen before they take it down! Share with your friends!

The Globalists don't want you to know this!  :) 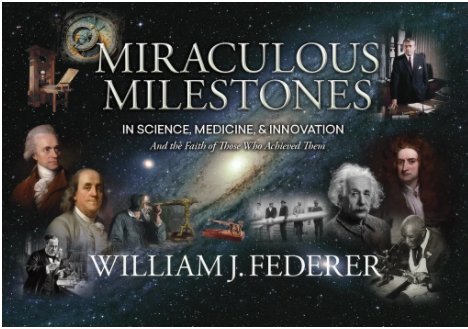 Also, it's now day 33 since I didn't take the Chinavirus experimental inoculation with no side effects!

Some other notable men of science who were men of faith :

George Washington Carver (1864–1943): American scientist, botanist, educator, and inventor. Carver believed he could have faith both in God and science and integrated them into his life. He testified on many occasions that his faith in Jesus was the only mechanism by which he could effectively pursue and perform the art of science

Igor Sikorsky (1889–1972): Russian–American aviation pioneer in both helicopters and fixed-wing aircraft. Sikorsky was a deeply religious Russian Orthodox Christian[144] and authored two religious and philosophical books (The Message of the Lord's Prayer and The Invisible Encounter).

Victor Francis Hess (1883–1964): practicing Roman Catholic who won a Nobel Prize in Physics and discovered cosmic rays.[140] In 1946 he wrote on the topic of the relationship between science and religion in his article "My Faith", in which he explained why he believed in God.[141]

Freeman Dyson (1923–2020): English-born American theoretical physicist and mathematician, known for his work in quantum electrodynamics, solid-state physics, astronomy and nuclear engineering.
Dyson disagreed with the scientific consensus that carbon dioxide (CO2) is a material driver of planetary temperature increases. He believed that some of the effects of increased CO2 levels are favourable and not taken into account by climate scientists, such as increased agricultural yield, and further that the positive benefits of CO2 likely outweigh the negative effects.[13][14][15] He was skeptical about the simulation models used to predict climate change, arguing that political efforts to reduce causes of climate change distract from other global problems that should take priority. He also signed the World Climate Declaration entitled "There is No Climate Emergency".[16]

Posted by Ed Bonderenka at 8:49 AM

Email ThisBlogThis!Share to TwitterShare to FacebookShare to Pinterest
Labels: Men (and Women) to be admired, Your American Heritage