The Patience of Job

I teach a Bible study,
A few years ago I taught on Job.
I got it wrong.
This is my penance.
I read what a number of people thought Job was about and introduced it to my group.
It wasn't bad, but for the last few weeks, my buddy Mike had been teaching Sunday School with the syllabus being on Job. 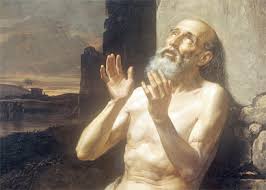 It got me to thinking.
Let's recap.

There was a man in the land of Uz, whose name was Job; and that man was blameless and upright, and one who feared God and shunned evil.

Now there was a day when the sons of God came to present themselves before the Lord, and Satan also came among them.

So if, you recall, Satan challenged God, saying that Job would not be so faithful if God did not bless him so much. So God gave permission to Satan to put Job to the test.
Job lost his cattle, his children, his wealth and it got so bad that his wife challenged him to "... curse God and die."

Well, let's notice that it appears that God did protect Job from harm because He had to remove that protection from Job for Satan to be able to put Job to the test.

That implies that Job did earn God's favor.

What happens next is a long series of "rebukes" of Job from his friends.
These friends assume that Job has done something wrong to merit these misfortunes, similar to assuming Job (and themselves?) had earned God's favor with their good works.
It would seem that their assumption would be an easy one to make, given that God had given Job protection based on his being a "righteous" guy.

So, did something change? If so, what?
Why was it wrong of them to make a judgment of Job based on what they saw?

Let's fast forward to John 9:1–12.
As he passed by, he saw a man blind from birth.  And his disciples asked him, “Rabbi, who sinned, this man or his parents, that he was born blind?”  Jesus answered, “It was not that this man sinned, or his parents, but that the works of God might be displayed in him.

So, if the lesson of Job (we know the end, right?) is to not judge by what you see, why was it still so prevalent a practice in Jesus' day? Why was the lesson not learned?
Was the lesson obscured by another message? One of being patient? That Job was a one time test, a special case?

In chapter 23, Job does begin to complain about God's behavior.
Perhaps he's wearying, beleaguered by his friends' chastisements?
His patience is wearing thin?
His confidence in his own righteousness causing he himself to wonder what God is up to?
Chapter 27:  ​ And Job again took up his discourse, and said:
“As God lives, who has taken away my right, and the Almighty, who has made my soul bitter,
as long as my breath is in me, and the spirit of God is in my nostrils,   my lips will not speak falsehood, and my tongue will not utter deceit.
Far be it from me to say that you are right; till I die I will not put away my integrity from me.
I hold fast my righteousness and will not let it go; my heart does not reproach me for any of my days..."

In chapter 32 a new character arrives, Elihu ("God of him") and begs to disagree with Job's friends.
Elihu prophesies, God speaks through him. This is not readily apparent except for the content of his words and the meaning of his name. He is standing in for God.
"For I am full of words; The spirit within me compels me.
Indeed my belly is like wine that has no vent;  It is ready to burst like new wineskins.
I will speak, that I may find relief; I must open my lips and answer."

In chapter 33 he chastises Job, who needs correction, but then he says:
Verse 6: Truly I am as your spokesman before God; I also have been formed out of clay.
Surely no fear of me will terrify you,  Nor will my hand be heavy on you."

Come on! Who is this guy? He challenges the old guys, he's new on the scene. He has a radical point of view. And after gently correcting Job, he tells him he is Job's intercessor before God!

Hebrews 8:1 "We have such a High Priest, who is seated at the right hand of the throne of the Majesty in the heavens..."

In chapter 38 God drops the pretense. We hear no more from Elihu. We hear from God!
He starts talking and continues on from where Elihu leaves off.
Because Elihu was HIM! ELOHIM! :)

I don't want to analyse the contents of Job or of God's monologue.
I'd be here all day, and I may be wearing on your patience already.

Let me summarize:
The Law made certain promises of reward for good behavior.
The Law was superseded by Faith in Mercy and Grace.
Job is a type of the Church.
He exhibits Faith.
His friends are the Pharisee leadership of Israel who judged by the Law and by their eyes.
His true friend is Elihu, Jesus.
The church will suffer, it won't always look like it's on the winning side.
It will suffer attacks by the religious establishment.

In the end, after God appears, or should we say reappears, God will elevate His church.
He will restore to them that that they lost.
Did you lose family? God will give you family.
Did you suffer shame? God will exalt you.

And God asks you to pray for your attackers.
Job 42:7 "After the Lord had spoken these words to Job, the Lord said to Eliphaz the Temanite: “My anger burns against you and against your two friends, for you have not spoken of me what is right, as my servant Job has.  Now therefore take seven bulls and seven rams and go to my servant Job and offer up a burnt offering for yourselves. And my servant Job shall pray for you, for I will accept his prayer not to deal with you according to your folly."

I've been thinking about this for a while and I know I have not done it full justice.
Please feel free to comment, correct or agree.

I just think that for a long time, the real message of Job has been missed and I wanted to share what I think is meant by the book.

Thanks for reading this far.
Posted by Ed Bonderenka at 10:05 PM