These videos are a compilation of many videos shot that day.
A large compilation. Prepare to fast forward.

in·sur·rec·tion
/ˌinsəˈrekSH(ə)n/
noun
a violent uprising against an authority or government. 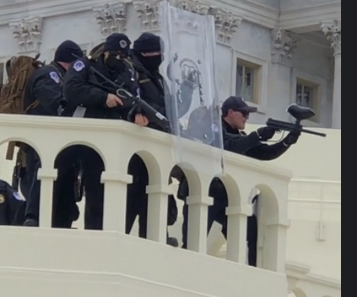 There were a lot of idiots there.
There are a lot of idiots everywhere.
There were troublemakers there.
From both sides.
Actually "all" sides: Pro-Trump, False-Flag-Pro-Trump, and what passes for "Law Enforcement".
Particularly the "Law Enforcement" that invited protesters in and held the door for them, held conversations with them, shot one of them..

But there was no insurrection.

Posted by Ed Bonderenka at 7:32 AM