It was February 8th or so.
A few of us were in my room in the barracks (Shaw AFB) drinking beer and listening to the stereo. Probably The Dark Side of the Moon or ELO.
It was snowing outside and had been.
I had driven into Sumter earlier in the evening to get a burger.
Some F4 jockey had gone off the bridge into base totalling his Vette.

The town was shutdown by a storm like we had here in Michigan today.
All things are relative.
Nothing shut down here but schools.

But, back to the base.
There came a knock on the door which was an alert that someone of rank was there.
We opened the door, and as we'd been guessing might happen, the First Sergeant was there to tell us to suit up and head to the Motor Pool.
My roommate was a mechanic at the motor pool for our squadron.
One of two.
We trudged through the snow down to the trucks.
Deuce and a Half. 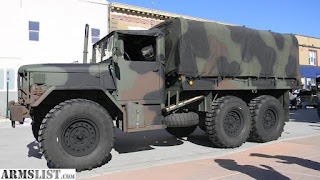 They were diesel and most of the guys were from the south, so only a couple of us knew to turn on the manifold heaters before trying to start the engines.
Otherwise the Diesel would gel and not flow.
My roommate Gary had to jump start a number of trucks that night. :)

We were told to martial at the County Courthouse downtown Sumter.
We convoyed down there.
When we got there, we were given orders.

I and another guy from a sister squadron (I was 682nd DASQ and he was 683rd) were told to head to Pinewood S.C. to aid in delivering food, fuel and rescuing stranded motorists. We were each issued a trustee from the local jail.
I was twenty years old and had just made Airman Second Class. I had two weeks time in grade over the other guy which made me ranking airman. And I had a convict in my truck I was supposed to deliver to a county garage to get a road grader to clear roads.
I dropped him off at Rosie's instead. At least that's where he wanted to go and who he said lived there. Who was I to argue?
The drive to Pinewood was about 20 miles. We had a map.
I drove lead.
There was some intersection that had a few homes and commercial buildings that we were going to go through.
As I was entering the intersection I noticed that the big snow drift in the middle of it had a radio antenna sticking out of it. It turned out to be a Beetle.
I swerved and went into a ditch.
My wingman and I spent over two hours getting me out of the ditch.
The winches mounted on the front of the trucks didn't work!
I later asked Gary why and he said they had disabled them to protect them from getting burned out. Thanks.
The other guy said he'd take lead after that.
As we approached Pinewood he would slow down and back up to ram through the snow that was piling up in front of his axles.
After a few times of that, the next time I saw him slowing down I hit my air horn and then I hit him. After a few times of that, we just drove bumper to bumper into town.
Twenty Wheel Drive. Seriously.

We got into town at daybreak and were met by the police chief who directed us to where the Civilian Defense shelter at the local school was set up.
The Chief started to give us directions of where we should drive and deliver.
That's when I met the mayor, a Republican.
The mayor had been recently elected by a margin given to him by a block of black voters that he had mobilized to reform the local government.
The Chief was the last holdout of the old regime, the good old boys.
Add to the mix that the CivDef center was headed up by a retired USAF Master Sergeant who was pals with the Chief.
Our instructions were to deliver hay and diesel to some local cattle farms.
The Mayor, however, let me know that there were a lot of people living in shacks and on the margin and who had no protection against a snowstorm like this.
I had a decision to make.
I made it and the retired Master Sergeant was a little upset.
He demanded to know who my commanding officer was.
I told him and he called.
"Son, your C.O. wants to talk to you." as he handed me the phone.
It's not like the colonel and I were close.
I took the phone with some trepidation.
He said, "Airman Bonderenka, martial law has been declared for the county, and you are the ranking airman in that district. Put the retired Master Sergeant back on the phone please."
Wow. But the Sarge took it well. and I took my direction from the Mayor.
We drove for hours.
At one point we came across some stranded motorists from Quebec.
We took them back to the school and the women started cooking.
I get a rush just thinking about it.
We ate well. and so did the people we brought in.
At one point we stepped outside to get in the trucks and saw an older tall thin black man high stepping through the snow towards us to buy groceries.
That man had walked a couple miles and intended to walk back.
We took him to the mayor who then realized we had missed a whole community
of people he had forgotten. So off we went. Delivering fuel oil and groceries and bringing in others to the school.

Later in the day, exhausted, we learned that the relief drivers couldn't drive in to town on the same road we had followed in the dark the night before.
Our relief would be coming in by helicopter.
My squadron had no helicopters.
I instructed a kid on a tractor with a blade to start clearing a section of the road for them to land on.
When the helicopter landed, he set down in a snowy field across from where we had cleared.
When I got aboard I asked the pilot why and he pointed to the power lines next to the clearing.
This was my first time on a chopper, but I was pretty sure they didn't all come with blue upholstered airliner seating and didn't all have the call sign "Marine One". We were on the presidents helicopter! It had been forced down at our base on the way to Key Biscayne, Florida. The Winter White House for President Nixon. 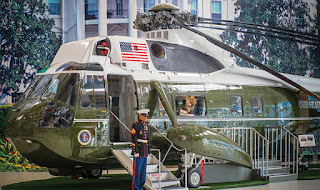 Having flown on aircraft where on takeoff you were pushed back in your seat (civilian) or away from your seat (military), I had never been in a takeoff where you got shoved down into your seat. That was different.

There was a nursing home that we could not reach by truck due to the snow, and it needed medicine.
We were going to stop there.
I woke up when we landed.
We waited for a while and nobody came. I must have dozed, because when we took off again I woke up and looked down as we were lifting off.
That's when I saw the doctor holding hands with what I assume was a nurse trudging to where we had just left.
I notified the steward (Marine) and he told the pilot and we landed again, they boarded and we took off.
We landed in a shopping center in Sumter where a pharmacist was waiting for us.
We then took off for the air base and I got out near a hanger and walked back to my barracks.
I woke up hours later and was issued another truck with my friend Darryl Gheen.
We drove back and did it again.
At one point in our travels, a small dog was trapped in the ruts ahead of us and literally could not get out of our way.
Darryl got out and brought it into the cab.
It stayed with us until we found the owner days later.
We eventually drove back to the Courthouse where we were given food and drink and debriefed, swapping stories.
One of my favorites was listening to a farmer tell us of driving down the highway and finding a Cadillac in a ditch.
He offered to pull the car out and the driver was indignant.
"I'm not having my $8,000 car pulled by a tractor!".
The farmer told him, "You're right! What was I thinking? I'm not taking the chance of damaging my $20,000 tractor."
It had a cab, heat/AC, an eight track stereo and a CB!

And that was that.
It is one of my most memorable experiences and an example of something I've said for years since.
Only service in the U.S. Military (or the Air Force) can give an opportunity for so much responsibility to a man at such a young age.
And the Service is just that. Service.

Later that summer, late August, Darryl and I were in Kresge's in town going through the record bins when someone said hello to us.
It was the Mayor of Pinewood.
He was happy to see us.
He then told us that the town was having a Labor Day celebration and he asked us to come so that he could present us an award for being town heroes.
We said we'd think about it.
We didn't go and to this day I wonder if we insulted them in our humility.

It's taken me 40+ years to write this, but with the snow outside, I've got nothing else to do, except go back out and plow the street some more.
As I was plowing it this morning on my garden tractor so I and my neighbors could get through (before going to the studio), it occurred to me: this is what conservatives do.
We don't wait for the government.

Posted by Ed Bonderenka at 6:09 PM